The Licensed Cocoa Buyers Association of Ghana (LICOBAG), has called on all cocoa farmers who have not received their payments for the 2021 Main Crop Season to consult their district offices for intervention.

They are to reach out to the district offices for necessary assessment and consideration in case Purchasing Clerks at the village and district levels had received funds and failed to pay them.

President of LICOBAG, Mr Samuel Adimado, who made the call at a news conference in Accra, also entreated the cocoa farmers who sought to get further information or provide evidence of non-payment, to contact the Licensed Cocoa Buying Companies (LBCs) involved or the LICOBAG Secretariat for assistance.

The call followed a number of complaints by some cocoa farmers about non-payments over purchases made from them by the LBCs during the main crop season, some of which got the attention of the media.

Mr Adimado explained that COCOBOD provided seed funding at the beginning of each cocoa season to all local LBCs, so that the LBCs could raise certificates beyond the seed funds for COCOBOD to make further payments.

“Further to that, as per the law that regulates the operations of licensed buying companies, we are required to provide supplementary funding to operate our businesses in addition to the seed funds provided by COCOBOD and the members of LICOBAG have discharged this duty over the years,” he said.

In the course of the season, he said, members of LICOBAG sometimes experienced delays in payment from COCOBOD, a situation which resulted from the negative effects of the COVID-19 pandemic on international trade and the external marketing of cocoa, which led to the closure of shipping ports and its consequent delay in shipments.

Others were the release of funds by international buyers, the substantial drop in the price of cocoa on the international market within the year, and the closure of many airports, hotels, and confectionary outlets, where chocolate and other cocoa products were highly patronised.

However, the LICOBAG President, also the Managing Director of Niche Cocoa, said that notwithstanding, members of the Association had paid for cocoa duly received from their farmers, although they admitted that in some instances due to the time lag between the receipt of funds and onward transfer to the district and society/village levels, there were some delays in monies reaching farmers.

Hajia Maria Adamu-Zibo, the Managing Director of Federated Commodities Limited, said the LBCs always did pre-financing to the farmers before receiving cocoa from them.

LBCs could not survive without paying farmers as they were a key stakeholder, she said and reiterated the need for those who had not been paid to approach the district offices with their grievances.

On his part, Victus Dzah, the Corporate Affairs Manager, Ecom Gh, said it was practically impossible for the Purchasing Clerks to hesitate to pay the farmers as proper checks were put in place to evaluate their activities and demand accountability every week after payments were done.

“Our farmers are our cherished treasure and without them, we have no business,” he said.

Mr Eric Asare Botwe, the Business Head, Cocoa, Olam Ghana, said every farmer was important to Cocoa Board, hence the need for the Board to ensure that all licensed buyers treated them well and satisfactorily. 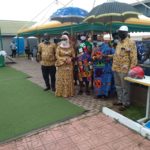